Carbon and silicon share a very important similar feature – they can simultaneously form bonds with 4 different atoms. With this capability, both are able to link together long chains of molecules. In other words, carbon and silicon are capable of forming proteins and DNA — what we know as the building blocks of life. But while carbon-based life is common, silicon-based life remains only a figment of our imagination. For now. Which is quite curious really, considering that their similar composition should make silicon just as capable as carbon when it comes to their life-building ability.

Carbon-silicon bonds can be seen as a medium to transform the production of a wide array of products – from paints, semiconductors to LED lights and computer screens. Next to oxygen, silicon is the second most abundant element in the Earth’s crust yet it is said that it has nothing to do with biological life.

Currently, silicon cannot bond with carbon through any existing biological processes or be part of any known biological molecules. To make compounds combining the two (which will be then recognized as organosilicons), artificial methods must be used.

However, recent developments in a study being conducted in the Caltech laboratory in California have proven otherwise. Apparently, the team of scientists at Caltech was able to encourage living cells to make carbon-silicon bonds, showing for the first time that silicon can be incorporated into a living organism’s biochemistry. Meaning, that with a little help, and under the right conditions there can actually be a way for living organisms to naturally combine carbon and silicon.

Caltech is a world-renowned science and engineering research and education institution. In the video posted below, which was released by the Caltech laboratory, Dr. Frances Arnold, the principal investigator of the study, discusses how they persuaded nature to make carbon-silicon bonds. They unveiled a protein to do the job. This was achieved through directed evolution — a process of artificial selection dominating all other existing methods of bonding the two elements. In this process, scientists mutate an enzyme called cytochrome c (comes from bacterium living in Icelandic hot springs) to catalyze bond reactions between silicon and carbon. After a few mutations in the protein, the enzyme became capable of making a carbon-silicon bond, something that can only be done previously by chemists, but can now be done by bacteria.

Through their research which has been published in Science, we now know it’s possible that lifeforms can also be based on silicon. We’re just not sure yet if life can evolve from silicon on its own, or maybe it just became possible (in the case of the bacteria used) because of the enhanced enzyme injected into it. Or maybe, it’s really up to nature and only time will tell. 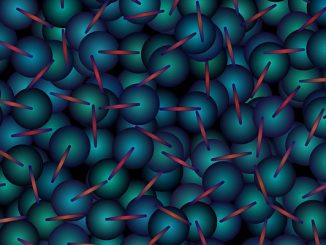