In 2015, a big chunk of the Pine Island Glacier (approximately 225 square miles) broke off, floated out into the ocean, melted and raised sea levels all over the world. It’s a troubling event in itself. And after scientists found out what caused the event, it has become even more disturbing.

Apparently, Pine Island Glacier began weakening and melting as it got heated by warm ocean waters beneath it. Eventually, the rift forming at its base caused a deep crack in the subsurface, which in turn split the ice from the inside out. And this is what led to the enormous Pine Island Glacier iceberg event.

The study which was published in Geophysical Research Letters provides proof of what scientists have already suspected about what was going on with the Antarctic Ice Shelf — it’s in danger of collapsing within the next century. And when this happens, seas across the globe can rise to 10 feet, putting major cities like London, New York, Miami, Manila and Sydney under water. Note the use of the word ‘when’ not ‘if’. It’s because we’re already at the stage of acceptance — the ice will melt, it’s only a question of when.

While rifts have become a common occurrence, they are typically formed on the edges of an ice shelf because the ice is thinner on that section and prone to breaking. The Pine Island Glacier is extraordinary because it resulted from a rift that started from the center. According to Dr Ian Howay who led this study: ‘This implies that something weakened the centre of the ice shelf, with the most likely explanation being a crevasse melted out at the bedrock level by a warming ocean.’

The rift formed is bad enough, especially because it originated from the bottom of a valley in the ice sheet — a section of the ice which was thinner than what’s surrounding it. What’s bad about a valley in the ice? It suggests that ocean water can get further into the West Antarctic Ice Sheet without being seen, melting the sheet from way below, weakening it faster and possibly causing more icebergs from breaking off at an accelerated rate.

It’s why the ‘accidental’ discovery of what caused the massive iceberg break is so timely. By probing further, there’s a better chance of accurately predicting when a breakdown in the ice shelf might happen again. And how it will happen. Although there’s no stopping it, at least some preparation can be done to minimize what is being expected as catastrophic damage and destruction wordlwide. And because the melting is mostly being caused by the worsening global warming, the best thing we can do is make a universal effort to decrease carbon and toxic fuel emissions to help slow the rising atmospheric temperature. 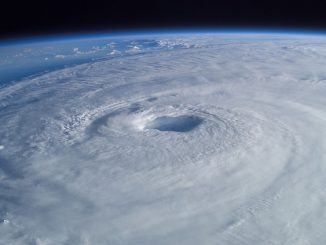 Climate Change Stunner: U.S. Leads the World in CO2 Reductions Since 2006, Thanks to Natural Gas

1 Comment on Melting Ice, Rising Seas: Our World Under Water