Combining engineering, materials science and physics, a team of scientists at The Australian National University (ANU) were able to design a new nanomaterial that can be controlled via temperature to either reflect or transmit light on demand. With this invention, our astronauts would no longer have to suffer exposure to harmful radiation because now there’s something that can better protect against it.

As described by lead researcher Dr. Mohsen Rahmani, the material they developed is so thin that ‘hundreds of layers could fit on the tip of a needle and could be applied to any surface, including spacesuits.’

Spacesuit protection is just one of its potential applications. It can also be used to make dual-purpose windows — those that can function as windows, then transform into mirrors on demand. Or, windows that allow control over the amount of light it lets in, something that can be particularly useful in terms of energy saving — both heating and cooling — depending on what season it is.

It won’t only be useful for homes and buildings. Even car windows can be outfitted with the material (instead of regular tint). Imagine how useful it would be to have a car whose windows turn transparent under direct sunlight so instead of letting light into the car and heating it up, it will instead act like mirrors, reflecting light instead of letting it through.

To be clear, though, the new nanomaterial isn’t exactly enough to provide complete protection against harmful cosmic radiation because it can only block visible light, not the deadly particles that cosmic rays are made of. That said, its ability to deflect harmful light (including deadly ultraviolet and infrared radiation) is enough to help provide better protection to space travellers.

According to the team, the new “technology significantly increases the resistance threshold against harmful radiation compared to today’s technologies, which rely on absorbing radiation with thick filters.”

So how does it work? The material’s surface is made of nanoparticles arranged in a 2D lattice. Depending on the temperature applied — whether it’s heated or cooled — the surface can be programmed to either reflect or transmit light waves. And just like a car which has parallel resistive wires built into the back windshield for defogging purposes, a similar kind of technique could be applied to the design of the nanomaterial so that temperature control will be focused on a specific area.

As reported by The Australian, the research team worked on their project for two years. With the right investment, though, the nanomaterial could already be put to use in another two to three years time.

The research was recently published in the journal Advanced Functional Materials. 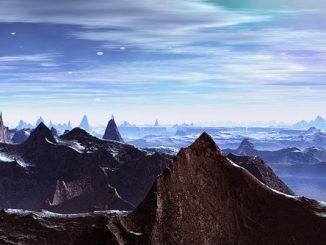