According to a recently published research paper done by Edgar Zapata, an employee at NASA’s Kennedy Space Center, the agency’s 2006 ‘unprecedented’ decision to rely on private companies like SpaceX and Orbital ATK for the delivery of payload to the International Space Station (ISS) has saved the public/government funded agency a considerable amount of money.

The paper, which attempted to calculate the combined costs of both NASA and the private programs, found that NASA’s 2006 decision to build through the private sector a spacecraft that could reignite a struggling American space program, changed radically the way the space agency did business. As a government entity known for its strict standards of risk-acceptability, NASA has always relied on using government-operated rockets like the Space Shuttle. However, that changed with NASA’s initial 2006 investment in SpaceX and Orbital ATK, an investment that materialized with SpaceX’s first Dragon flight to the Space Station on May 22, 2012.

Since then, these partnerships – and this based on Zapata’s findings – have been one of the true bargains of the 21st century. By outsourcing the development of its own rockets and spacecraft, NASA has been able to save hundred of millions of dollars through all the missions launched in combination with SpaceX and Orbital ATK.

SpaceX uses its Dragon cargo spacecraft on top of its Falcon 9 rocket to send supplies to the ISS, while Orbital ATK uses its Antares rocket or the Atlas V rocket built by the United Launch Alliance for launches of the Cygnus cargo capsule. Considering development and operational costs, Zapata estimates that had NASA developed its own cargo spacecraft, the launch cost per kilogram (kg) of cargo delivered to the space station would have been around $272,000. SpaceX and Orbital ATK only cost NASA $89,000 and $135,000 per kg of cargo, respectively.

Zapata also estimated that it will cost $405 million for a SpaceX Dragon crew deployment of four people. Meanwhile, Boeing”s CST-100 Starliner commercial crew vehicle — scheduled for its first test flight in 2019 — would cost around $654 million. That sounds like a lot of cash, and it definitely is, but Zapata estimates that it is still 37 to 39% cheaper of what it would have cost the government to develop its own spaceship.

The paper also suggests that the government has more than recouped its $140 million initial investment in the development of SpaceX’s Falcon 9.

“It is arguable that the U.S. Treasury has already made that…investment back and then some merely from the taxation of jobs at SpaceX and its suppliers only from non-government economic activity,” the study said. “The over $1 billion (net difference) is U.S. economic activity that would have otherwise mostly gone abroad. This is very different from the economic benefit when NASA is a sole user of a system.”

As NASA looks toward deep space, including the Moon and Mars, a positive financial return on the government’s multi million-dollar investment can only be good news for SpaceX/Tesla CEO Elon Musk, whose ultimate goal is to land man on Mars and colonize the planet. In a speech titled Making Humans a Multiplanetary Species, Musk estimated about $140,000 per ton for trips to the Red Planet.

Again here, we obviously have no idea if Musk’s plans and calculations or Amazon’s Jeff Bezos vision of seeing “millions of people living and working in space”will succeed and flourish given that anything that has to do with space travel is obviously very expensive and extremely complicated. That said however, what’s important is that the nascent space industry has finally entered an era that is being driven by a competitive marketplace which includes deeply motivated, financially savvy, and independent visionary entrepreneurs with a passion to solve world’s biggest challenges. 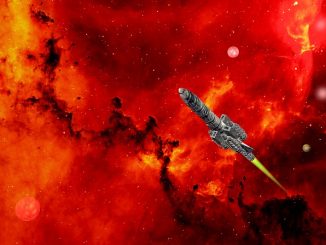 1 Comment on SpaceX, One of NASA’s True Bargains of the 21st Century