There are four fundamental forces in the universe. There’s gravity, which is what keeps us on the ground. There’s electromagnetism which holds atoms together. Then, there’s strong force keeping an atom’s nucleus intact. And there’s also weak force which causes radioactive decay. All these forces keep the universe together and if any one of these is lost, the universe would simply fall apart.

Among these four forces, the weakest (even weaker than the ‘weak force’) is gravity. And one theory that could possibly explain this weakness is something that sci-fi fans would so like to believe: the universe has other dimensions — not just the 3 spatial dimensions and time that we know. The thinking goes that part of gravity’s force is leaking into those dimensions, whatever they are, which is what is making it so weak.

As exciting as this explanation is, it’s quite difficult to prove. Even the world’s biggest particle accelerator on which scientists were pinning their hopes on — CERN’s Large Hadron Collider (LHC) — has not been able to provide conclusive proof about the existence of other dimensions.

But we’re talking about science, and scientists are not known for quitting.

In their pursuit to find evidence that other dimensions exist, researchers Gustavo Lucena Gómez and David Andriot at the Max Planck Institute for Gravitational Physics turned to gravitational waves — ripples in the fabric of space-time resulting from the motion of massive objects that release extreme amounts of energy, such as blackholes colliding or galaxies merging.

They set out to calculate how such extra dimensions might impact those ripples in space-time that we are able to observe. And they found two unusual effects: a ‘massive tower’ of extra waves at high frequencies, and a change in how gravitational waves would stretch space.

Even with today’s most advanced technologies, the first effect will be almost impossible to detect. Finding such additional waves at high frequencies, though, would irrefutably prove that other dimensions indeed exist.

While detecting this ‘breathing mode’ is more feasible than spotting extra towering waves at high frequencies, the downside is — that an extra dimension is what’s causing it is just one possible explanation. In other words, it’s not definitive proof because there might be other explanations for it.

Still, an indication is better than none at all. Especially in light of the fact that there are many mysteries in the universe — including the gap between classical physics and quantum physics, as well as why the Universe seems to be expanding at an accelerated rate — that can be explained by something bizarre like the existence of other dimensions.

Dr. Gómez said: “With more detectors we will be able to see whether this breathing mode is happening.” And that’s definitely something interesting from a scientific point of view as the results will effect the analysis of the relationships between different physical quantities.

The research was recently published on arXiv.org. 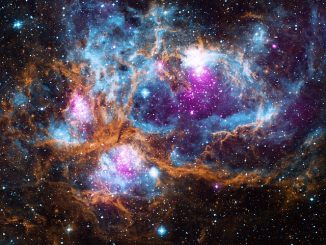