Remember the power of Star Wars’ Death Star laser which had the power to destroy an entire planet in just a matter of seconds? A team of researchers at the Macquarie University in Sydney, Australia have proven that a superlaser (like Death Star’s iconic weapon) is no longer just stuff that sci-fi movies are made of.

In a paper entitled “Diamond-based concept for combining beams at very high average powers”, the team led by Dr. Aaron McKay demonstrates how the power of several laser beams can be combined and concentrated into a single super laser beam that can be directed at a specific target. As horrifying as it sounds — if you’re still thinking about the Death Star and how it effortlessly obliterated Princess Leia’s home planet Alderaan in the fictional world of Star Wars, of course — it’s a development that actually has useful real-life applications.

In a statement they issued, co-author Rich Mildren, an associate professor of physics at Macquarie University, said: “Researchers are developing high power lasers to combat threats to security from the increased proliferation of low-cost drones and missile technology. High power lasers are also needed in space applications including powering space vehicles and tackling the growing space junk problem that threatens satellite.”

As explained by Dr. McKay, laser researchers today have been struggling to figure out how the power of lasers can be increased, while effectively handling the intense build-up of heat that comes with it. Combining beams from several different laser sources seems to be a feasible solution for this.

Research teams from around the world have been experimenting with different materials to achieve beam-combining. Dr. McKay’s team is the first to use a diamond. And it’s looking like theirs may be the ideal choice. Specifically, they used an ultra-pure diamond crystal at the point of convergence.

Because of a ‘cooperative effect’ within the crystal and the diamond’s inherent ability to quickly dissipate waste heat, they were able to combine multiple laser beams into one single superbeam without too much heat build-up. There was no loss of power either because the distortion issue experienced by single laser technologies was non-existent, which means each single laser beam passing through the crystal was able to transfer all of its energy to the superbeam.

Additionally, combining beams in the diamond produced an unexpected effect — it changed the color of the resulting superlaser beam. The wavelength of the resulting energy beam is likewise of crucial importance. It doesn’t only allow for efficient energy transmission. It also reduces the eye hazard for anyone that happens to be within the vicinity of the directed beam.

The research was recently published in the journal Laser and Photonics Reviews. 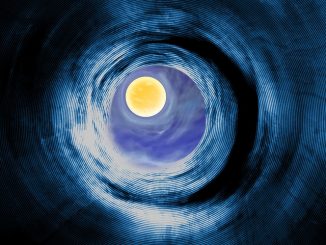