On Wednesday, Microsoft Corporation (NASDAQ:MSFT) started its two-hour Windows 2016 event in Lower Manhattan with a fervent message: “We don’t build Windows for all of us. We build Windows for each of us.” For decades, the company has been relentlessly creating new technological approaches for a wide range of functionalities that work for everybody, and the biggest Microsoft event of this year did just that with its second major update to Windows 10, called the Creators Update which will include support for 3-D experiences. The event also included Microsoft’s HoloLens, an augmented reality headset, Surface Studio-Redmond’s first-ever desktop computer, 3D Capability, Gaming Features, “My People” etc.

The first feature Microsoft unveiled was the simple digital arts app Paint with revamped 3D capability. With the tagline, “3D is for Everyone,” creating 3D is made as easy as taking a picture or a video by merely scanning an object. In the Paint app, 2D sketches turn into 3D objects using 2D pens and pencils.

HoloLens is a virtual reality headset that will be sold through Microsoft’s partners HP, Dell, Lenovo, ASUS, and Acer. Microsoft claims this is the first VR accessory that has inside-out positioning imprint. The device comes with 6 degrees of freedom sensors without external sensors, which means the headset is capable of positional tracking. With the Windows 10 Creators Update, HoloLens is integrated with other features enabling users to create, scan, print, and share in 3D. The Microsoft Edge is a portal for VR digital content that takes users from the real world to the digital world and back. HoloLens price point starts at $299.

Gaming features of the new Windows 10 Creators Update include Beam integration on Windows 10 PC and Xbox One. This allows users to easily stream game play online without third-party streaming app or additional devices. Another gaming update is the Xbox One, which will have integrated functionality on Windows, along with Bitstream audio for the game console featuring Dolby Atmos for enhanced audio and 4k gaming experience with BluRay compatibility.

Microsoft is building bridges with the “My People” feature. Windows 10 Creators Update allows users to add favorite contacts in the task bar. Sharing files is made easy, as well. Click and drag any document, photo or video to the contact in the task bar to send.

Windows 10 Creators Update will be available this spring and is free for existing Windows 10 users.

Microsoft’s first desktop, the Surface Studio converts a computer screen into a digital canvas. The 28” screen has PixelSense display, 4500×3000 resolution with 3:2 aspect ratio, and 192DPI. It comes with Quad-Core 6th Gen Intel Core i5/i7 processors, NVIDIA GeForce GPU of up to 4GB, up to 32GB of RAM, and 1TB/2TB hybrid drive.

The Surface Dial is a hockey puck-shaped input device that allows users to adjust things in the Surface Studio desktop. It can store, access, customize, and navigate digital tools in the computer.

The Surface Book is a detachable 13.5-inch laptop with bigger and better battery. While Microsoft retained the design of its original model, the configuration was amped up in this new laptop. Display features include 13.5” PixelSense, 3000×2000 resolution (267 PPI), and aspect ratio of 3:2. It comes with 6th Gen Intel Core i7 with NVIDIA GeForce GTX 965M 2GB GDDR5 memory, 8GB/16GB of RAM, and a whopping up to 16 hours of video playback. 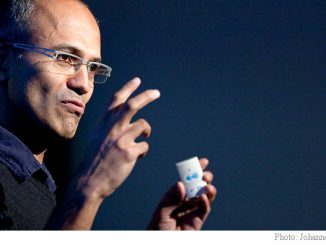 Can Microsoft’s (MSFT) Impressive Rally Continue or Has Nadella Triggered the End of It?