Shares of Tesla Motors, Inc. (TSLA) are lower by more than 4% to $142.00 in pre-market trading on Tuesday. The name plunged 9% to $147.99 in trading Monday, printing its lowest closing price-per-share since January 2014. The electric car maker will report 4Q15 earnings Wednesday after the market close. Wall Street analysts are on average expecting the name to post $1.81 billion in sales during the quarter. This would show a 87.80% increase from the Q315 revenue of $963.8 million, and an increase of 89.13% from the same period in Q414. EPS in 4Q15 are expected to come in at $0.11 from ($0.13) per share a year earlier. Meanwhile, EarningsWhisper.com reports a whisper number of $0.18 per share.

Tesla shares have declined 31.37% in the last 4 weeks, and 36.15% in the past three months. Over the past 5 trading sessions the stock has lost 24.86%. Shares of Tesla Motors are down 38.34% since the beginning of the year against S&P 500 Index’s loss of 7.50% over the same time period. Bearish sentiment on the name has been on the rise since the release of the Model X at the end of the third quarter, and the company’s inability to roll out quickly its new SUV. Another concern is that cheap gasoline is effecting demand for electric cars. Such concerns have led UBS analysts to cut target price on TSLA from $190 to $160, the lowest amongst Street analysts. 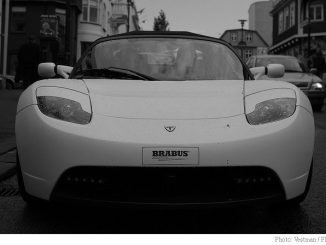 TSLA Stock: 2017 May Well Be Tesla’s Make Or Break Year