Regulators say they gave consumers a holiday gift by putting a stop to the planned $39 billion merger of AT&T and T-Mobile. I wish they had included a return receipt.

After nine months, AT&T’s plan to acquire Deutsche Telekom-owned competitor T-Mobile came to an end last week, when AT&T (T) decided the costs of fighting regulators for approval of the deal were simply too high. Obstacles included the Justice Department suing to block the transaction and the Federal Communication Commission waging a separate war of attrition.

According to regulators, the deal had to be blocked to preserve competition in the wireless market. With T-Mobile out of the picture, only three major players would have been left on the field: a strengthened AT&T; its arch-nemesis Verizon Wireless; and the underdog Sprint. Those who have a positive outlook on the deal breakup argue that T-Mobile’s lower prices and continued independence will keep prices in check for all four carriers’ customers. T-Mobile’s monthly wireless plans are $15 to $50 cheaper than comparable AT&T plans, Bloomberg reported based on analysis by Consumer Reports.

But what opponents of the erstwhile deal failed to notice was that, even with the lowest prices around, T-Mobile has been failing to attract the most valuable customers. While it has managed to keep adding at least a small number of patrons, bringing in a net gain of 126,000 new subscribers in the third quarter of 2011, the bulk of T-Mobile’s new business is from prepaid subscribers. Meanwhile, the company has been losing the contract or postpaid customers who generate 80 percent of its revenue.

With its bargain basement prices, T-Mobile simply cannot afford to offer the cutting-edge services that better-paying customers demand. It is the only one of the top four providers that does not offer the iPhone, and it lacks the capital to roll out a national long term evolution (LTE) network, which is the forthcoming standard for high-end data service. As an individual consumer and a business owner, I choose to do my business with AT&T, not because I am unaware of T-Mobile’s lower prices or because I simply prefer to pay more, but because I think T-Mobile does not offer as good an overall value.

Even for consumers who are interested in what T-Mobile has to offer, the breakup of the deal is unlikely to do much good. Deutsche Telekom has made no secret of the fact that it is tired of dumping money into a North American enterprise that is quickly proving itself obsolete. To remain competitive in Europe, T-Mobile’s German parent needs to focus its energy and its resources on expanding its infrastructure there.

Now that it has lost the opportunity to sell T-Mobile to AT&T, Deutsche Telekom may resume the preliminary talks it started with Sprint. A merger between T-Mobile and Sprint is not likely to actually materialize, however, because of differences in the core technologies used by the two carriers. While AT&T and T-Mobile use Global System for Mobile (GSM) technology, Sprint, like Verizon, uses Code Division Multiple Access (CDMA). It wouldn’t be impossible to overcome this obstacle – there are already some dual-mode phones available – but it wouldn’t be easy, either. As an alternative, Deutsche Telekom might cut T-Mobile loose to sink or swim on its own. Sinking is the likelier conclusion. Regardless of what happens, it is clear that regulators will not achieve their goal of preserving four competitive national carriers.

While regulators’ interference did little to help current or potential T-Mobile customers, it did plenty to hurt AT&T’s 100 million subscribers, myself included. We customers will bear the cost of the $3 billion breakup fee AT&T now owes to Deutsche Telekom for calling off the deal. In addition to that upfront cash, AT&T will have to transfer radio spectrum and strike a more favorable network-sharing agreement with T-Mobile. This will hold back AT&T’s efforts to improve its own network, upon which customers like myself depend.

The long-term costs will run even deeper. AT&T was counting on the deal to give it spectrum and tower sites that it can use to boost its capacity to accommodate the data demands of today’s phones, tablets and other mobile devices. Now it will have to find alternatives to the original plan, which would have made better use of T-Mobile’s suboptimal infrastructure.

Another consequence of the deal’s failure is that the cost of AT&T’s future improvements will be spread among fewer customers than if the merger had gone forward. As a result, AT&T customers (again, this includes me) will pay more, not less, to get high-quality service. Thanks, Washington.

The only real winners are the other two major carriers, Verizon and Sprint. Regulators’ meddling gives them an unearned advantage by making AT&T a weaker competitor, which is a poor trade-off for keeping a limping T-Mobile in the wireless race. Verizon gets to keep its slot as number one in terms of number of subscribers, and Sprint gets to keep its spot as not last. The two will be able to continue largely ignoring T-Mobile as it lurches toward irrelevance. Not having to face a larger, more efficient competitor will give Sprint and Verizon greater leeway to keep prices high. In case regulators are confused, this is not supposed to be the outcome of an anti-trust action.

The ways in which regulators handled this transaction reflect deeper problems within the current administration. Rather than listening to what economic actors are actually saying with their wallets, the administration is intent on imposing its own idea of what’s best for everyone else. As a result, we now have the choice of an option that no one really wants to choose and one that Deutsche Telekom would rather not offer, as well as the fact that AT&T customers will likely be forced to wait longer for faster, cheaper service.

I realize not all readers will agree with me. If you are happy with the outcome of the deal, you might want to reward the public servants at the FCC and Justice Department with an equally thoughtful gift, perhaps a new phone from T-Mobile. You just have to hope they don’t want iPhones.

The Era of Corporate Split Personalities 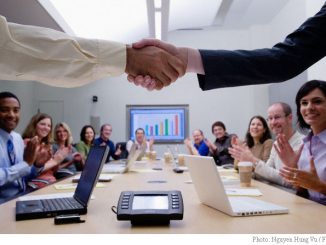 Menace to Savings and Small Businesses

6 Comments on One Holiday Gift We Can’t Return