It’s much too little, but not at all too late.  (No such thing as long and variable lags.)

This morning there was a sudden jump in (Treasury) interest rates all across the yield curve (except the short end where they are pegged at near zero, and were unchanged.)

What caused this good news?  That’s simple, we had an almost perfect example of an event study.  The world’s major central banks did a coordinated easing of monetary policy this morning.

The Federal Reserve and five other central banks agreed to reduce the interest rate on dollar liquidity swap lines by 50 basis points and extend their authorization through Feb. 1, 2013.

The new interest rate has been reduced to the dollar overnight index swap rate plus 50 basis points, or half a percentage point, from 100 basis points, the Fed said in a statement in Washington. The Bank of Canada, Bank of England, Bank of Japan (8301), European Central Bank and Swiss National Bank (SNBN) are involved in the coordinated action, the Fed said.

The story of an upward-sloping IS curve I’m putting forward here isn’t really new. I read something roughly similar a few months back, but I have forgotten who wrote it. (It was a paper linked by a commenter on a previous post, had “Monetarist” in the title, and was written about 10 years back.)

Authors need to re-write the IS-LM model to show upward-sloping IS curves.

Market monetarism:  Describing the world as it is, not as textbooks say it is.

Update: Today’s stock market reactions understate the actual impact of monetary easing on stock prices, as some sort of move was already anticipated, and priced into stocks. 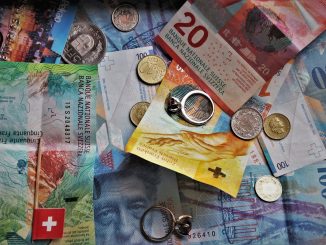 An Unfortunate Milestone: The Swiss Bank’s Biggest Loss in 116 Years