With so many tech companies dropping so many quality smartphones into their flagship lineups, it can be hard to figure out which one is right for you. A closer view at Samsung’s Galaxy S10 range will perhaps help you make that choice.

With that in mind, let’s take a look at Samsung’s Galaxy S10e phone, which is the entry-level model of Samsung’s S10 generation. After using and testing this phone for about a month, I can say without hesitation that the S10e model is a truly great piece of hardware and Android’s best when you consider price. The reason I say this is because even with compromises like having a smaller display, packing only two cameras on the back instead of three, or having a lower screen to-body ratio – which is minimalistic when you compare it to the rest of the S10 variants, I would still get the S10e over both the S10 & S10 Plus models.

Don’t get me wrong, I’m not suggesting the S10 and S10 Plus are inferior as configurations to the S10e. That would be a baseless argument to make. In fact, despite being more than a year old, the S10 line’s speed and performance remains excellent. All three phones have stellar build quality, plenty of raw power under the hood, same brilliant displays and a superb camera system – one of the most versatile ever seen on a smartphone. They even charge faster wirelessly than previous Galaxy phones.

However, my argument in S10e’s favor is based on the assumption that considering smartphones have become such an integral part of our lives — they are your phone, your email, your TV, your web browser, your camera, your music player, your messaging device, and more — most people when looking to buy one, they are not only looking for a powerful and capable device but also for one that doesn’t stretch their pockets. That’s where Samsung’s S10e comes in as one of the best affordable flagships worthy of your attention. Furthermore, there isn’t really a noticeable difference in S10e’s speed and performance compared to the Galaxy S10 and S10 Plus versions.

The Galaxy S10 variants also include features like a USB-C charging port and the old fashioned 3.5mm headphone jack on the phone’s bottom, plus a SIM card tray on top and a dedicated Bixby button located on the phone’s left side so you can talk to Samsung’s improved virtual assistant. All three devices are programmed to charge Qi-certified gadgets like a wireless charger. They are also compatible with Samsung’s PowerShare reverse wireless charging standards and they all run Android Pie 9.0 with Samsung’s fabulous One User Interface. With so much being the same, one wonders what’s different.

The first technical differences in the Galaxy S10 lineup appear once we start looking at the display, camera specs, fingerprint sensors, memory-storage and battery life.

The Galaxy S10 range comes with a standard 128 gigabytes (GB) of storage and the same expandable storage capacity in the SIM card tray where you can add up to 512 gigs using an external micro SD card. While the Galaxy S10 and S10 Plus are available with 8GB and 12GB of RAM and that exclusive 1TB storage option, the S10e comes with only 6 gigs of memory, although you can opt for a beefier version with 8 GB of RAM and 256 GB of storage. It’s worth keeping in mind that, even after the upgrade, the S10e is still cheaper than the regular Galaxy S10.

Generally speaking, more RAM is better. But is it really necessary?

Personally, I think for smartphones 6GB of RAM is plenty given that that kind of memory handles most people’s smartphone habits just fine. My S10e 6GB/128GB model allows me to easily run the most powerful apps. It also runs with minimal differences, if not equally as fast as the larger Galaxy S10 version. In fact, if you open a number of apps at once and do a side by side S10/S10e run test-comparison you won’t notice a difference between the two variants. That’s due to the fact that at the heart of the S10 range – which includes support for Wi-Fi 6 as well as LTE multi-gigabit speeds – is the inclusion of the latest Qualcomm 7 nanometer (nm) octa-core Snapdragon 855 chip or Samsung’s in-house Exynos 9820 octa chipset.

It’s worth mentioning that if you are in North America, your phone will come with the Snapdragon mobile platform while consumers in the rest of the world will get theirs with Samsung’s Exynos 9820. I am not going into key SoC specifics since they vary in terms of composition, complexity and sophistication but the general perception is that the Snapdragon is the best choice for your Galaxy S10 configurations given the 5G/Artificial Intelligence (AI)-capable processor offers better overall performance. It has no overheating issues, has a better graphics chip and slightly better battery life than Samsung’s Exynos.

So, if you have the option to choose one chipset over the other, go with the Snapdragon system.

The S10e has a dual camera setup on the back comprising an ultra-wide 16MP (megapixel) sensor with a 123-degree field of view, and a 12MP telephoto lens with a 77-degree field of view. On the front (and here is where the S10 Plus sets itself apart from the Galaxy pack with its 2-front-facing cameras) there’s a solitary 10MP dual-pixel, wide-angle selfie punch-hole camera that’s primed for selfie shots.

Apart from the fact the S10e may have 2 rear cameras as opposed to the 3 on the more expensive S10 models, the camera quality on the S10e variant is of the same level of excellence as on the other S10 configurations and on par with other leading camera phones. In fact, all three Galaxy S10 models share the same core camera specs and the same software. That means that when you shoot most of your images you won’t see any major differences between variants. Keep in mind that basic camera settings like white balance, ISO (International Organization for Standardization), aperture and shutter speed, which are the main pillars of photography and have a major effect on your subjects and scenarios, are all intelligently optimized by your phone’s cameras. In the words of Samsung: S10e “lets you shoot like a pro, without being a pro”.

It’s worth mentioning the “telephoto lens” that allows for 2x optical zoom into an image without losing sharpness, and the 8 MP front “depth-sensor” camera are options that have not been included in the S10e configuration. Both of these features are reserved exclusively for the S10 and S10 Plus models, respectively.

It goes without saying that the S10e comes with lot of modes and features to choose from in the camera app. The “Scene Optimizer” is one such feature. It uses artificial intelligence to detect a subject or scene and then automatically adjusts the settings via a technique called “Local Tone Mapping” to optimize settings like exposure, contrast, white balance and more, and then produce the best shot possible. It’s a really cool feature that can be turned on and off quickly.

In terms of apps, “HD Camera For Android” is another interesting one. This native android system camera app has an inbuilt white balance setting that is perfect for most shooting situations. With this application, you can shoot high-quality material.

Another spec difference in the Galaxy S10 lineup appears with the fingerprint scanner. While the S10 and S10 Plus come equipped with a built-in ultrasonic fingerprint recognition sensor, the S10e comes with a fast and reliable capacitive-style pad fingerprint reader that’s fused into the power button. The sensor’s placement is spot on and unlike hit or miss in-display scanners you can feel the power button/sensor without having to look at your phone. It’s practical and convenient at the same time.

One downside however is that if you are left-handed or have small hands you may find the sensor’s placement awkward. It also doesn’t handle wet fingers as well as the ultrasonic fingerprint sensor in the S10. That said, S10e’s scanner is far more accurate and faster than the in-screen reader model.

Finally, the battery, arguably the most important piece of hardware on the device.

It’s worth pointing out that while there’s no average time that a battery will last, 3,100 mAh is nothing to sneeze at. In normal use you can get between 6-7 hours screen on time (SOT) on your S10e with no power saving mode enabled. If you want to improve your SOT you can turn on the Adaptive Power Saving Mode. This very useful saving feature, which uses a data analytics technique to learn about your app usage patterns, manages your battery life based on your daily routine.

The S10 variant in the meantime, comes with 3,400mAh, followed by the S10 Plus which features the largest capacity with a massive 4,100 milliamp hours. This type of capacity makes the S10 Plus one of the longest lasting phones you can buy.

For what the S10e offers I think Samsung did a superb job. Great form factor, compact, brilliant screen, impressive brightness range from ultra dark to bright, 6-8 gigs of RAM, 128 gigs of base storage, reverse charging, IP68, stellar build quality. Let’s face it, this high-value smartphone which packs almost everything the S10 and S10 Plus have but at a lower price, is a homerun!

Fun Facts: The S10e screen is flat while the S10 and S10 Plus screens curve on the sides giving both variants a slightly more immersive look. While S10e’s 438 ppi (pixels per inch) don’t quite match its big siblings’ 500+ ppi, it’s still significant. Images remain crisp and detailed. Screen-to-body ratio is 88% for the one-hand-friendly S10e, 87.5% for the S10, and 84.5% for the S10 Plus. In terms of design, the S10e comes with a lightweight aluminium frame with front and back glass panels. The back of the phone is dominated by the Samsung logo and dual camera setup. The S10e comes in black, blue, pink, or white colors. It is light, measuring 150 grams in weight, extremely slippery, and picks up fingerprints like any glass device.

For what the S10e offers I think Samsung did a superb job. Great form factor, compact, brilliant screen, impressive brightness range from ultra dark to bright, 6-8 gigs of RAM, 128 gigs of base storage, reverse charging, IP68, stellar build quality. Let’s face it, this high-value smartphone which packs almost everything the S10 and S10 Plus have but at a lower price, is a homerun! 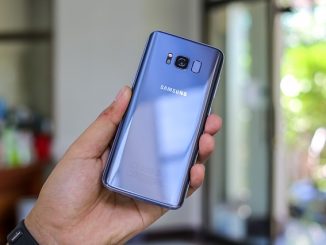 Apple (AAPL) vs Samsung, Looks Like We’ll Be Doing This All Over Again