Scientists at the University of Oklahoma (OU) for the first time ever have confirmed in a study the existence of planets beyond the Milky Way galaxy. Previously, planets have been detected only in the galaxy that contains our Solar System.

The study, published Feb. 2 in The Astrophysical Journal Letters, gives the first ever recorded evidence that a massive number of extragalactic exoplanets – planets orbiting a star located outside the Milky Way – could exist beyond our home galaxy in the universe.

The incredible breakthrough was made possible using information from NASA’s Chandra X-ray space observatory which specializes in taking space-based images of the universe in X-ray light, and a planet detection technique called “microlensing” – a magnification like method capable of discovering planets at truly great distances (on the order of billions of light years).

After studying a distant *quasar galaxy (*as in one of the brightest objects in the Universe), the OU astrophysicists found evidence that there are approximately 2,000 unbound planets for every one star beyond the Milky Way.

Xinyu Dai, the OU astronomy and astrophysics professor who led the study estimates that the number of planets in the newly found galaxy, which ranged from being as massive as the Moon to Jupiter, is more than a trillion.

“We are very excited about this discovery. This is the first time anyone has discovered planets outside our galaxy,” said Dai, noting that these “small planets are the best candidate for the signature we observed in this study using the microlensing technique”. Dai also said that his team analyzed “the high frequency of the signature by modeling the data to determine the mass.”

Until now, no evidence of planets in other galaxies had ever been detected. In fact, scientists were not even sure planets existed in other galaxies prior to this study. Furthermore, the microlensing technique has only been used to detect a total of 53 planets within the Milky Way.

“This is an example of how powerful the techniques of analysis of extragalactic microlensing can be. This galaxy is located 3.8 billion light years away, and there is not the slightest chance of observing these planets directly, not even with the best telescope one can imagine in a science fiction scenario,” said OU postdoctoral researcher Eduardo Guerras. “However, we are able to study them, unveil their presence and even have an idea of their masses. This is very cool science.” 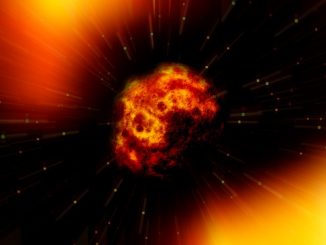