Ripple’s XRP, the second most valuable digital currency after Bitcoin, saw on Wednesday (Jan. 3) its overall market cap hit a staggering $120 billion to surpass by about $26 billion that of Ethereum, long the second-largest cryptocurrency by market value. While it was trading at just 25 cents in early December, by 7.00 a.m. pacific time on Wednesday, the price of Ripple’s digital asset XRP jumped 20% to hit an all-time high of $3.00. Ripple’s spike comes after hitting a low of $2 following its previous all-time-high of $2.85 on Dec. 30, 2017.

So what’s fueling the spike and what sets the San Francisco-based Ripple as a company as well as a currency apart?

Designed to use blockchain technology to handle large volumes of transactions for banks, exchanges and other financial institutions, what differentiates Ripple from other digital currencies is the platform’s smart cryptography that ensures transactions are superfast and atomic. Cross-border payments processing that can take one or more hours with Bitcoin and several minutes with Ethereum to achieve its minimum number of confirmations can go through in a matter of seconds with Ripple, making the crypto well-suited for real-time commerce.

Another advantage Ripple has is that its ledger is ILP (Inter Ledger Protocol)-enabled. This means the database can communicate with other ILP-enabled networks, thus increasing the system’s ability to generate liquidity. Ripple is also the only top crypto backed by a US-based company which also happened to have connections with legitimate banks. In fact, more than 100 financial institutions globally, including big-name clients like Bank of America (NYSE:BAC), American Express (NYSE:AMX), Santander and UBS have partnered to integrate Ripple’s blockchain technology. Ripple CTO Stefan Thomas told TheStreet back in August that over 75 of the company’s customers had already moved beyond pilots to commercial deployments.

Going forward, a host of new customers from France’s Credit Agricole to UK-based payment providers IFX, TransferGo, and Currencies Direct are set to begin testing RippleNet, Ripple’s distributed ledger network. Ripple has also cleared a payments path into South America via dLocal, a fintech company that specializes in cross-border payments for emerging markets. Furthermore, and in a first, Mexican non-bank financial services firm Cuallix has announced plans to pilot XRP as a liquidity tool to reduce the costs of payments from the US to Mexico.

Ripple says that as Cuallix moves to XRP commercial deployment, “it’ll make history as the first financial institution to unlock the full value of blockchain and digital assets, solving the inefficiencies of both processing and liquidity in global payments.”

Brad Garlinghouse, CEO of Ripple, who as a former Yahoo senior VP also happened to be the author of the famous “Peanut Butter Manifesto, said back in October that global payments are undeniably going through a sea change.

“I think we’re really at a tipping point for the blockchain industry,” he told CNBC in a phone interview.

Ripple, which is believed to own about 60% — or $16 billion worth — of the 100 billion XRP in existence, recently announced that it has raised $94 million from investors including IDG Capital Partners, CME Ventures, Andreessen Horowitz and Alphabet’s GV, formerly Google Ventures.

In addition to this recent news, there was an announcement in early December that several Japanese banks and South Korean banks are set to start processing real cross-border payment volumes using Ripple’s system.

XRP’s new all-time high comes as Bitcoin, after nosediving from $19,000 to around $13,000 in a matter of days, jumped to a six-day high of $15,400 earlier today on news that Founders Fund, the venture-capital firm founded by the high-profile billionaire investor Peter Thiel has put $15 million–$20 million into the popular cryptocurrency. 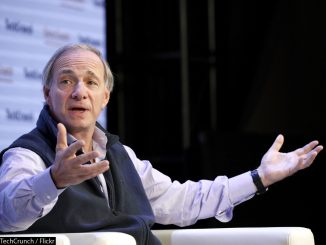