A team of Australian scientists from the University of New South Wales (UNSW) has made a significant breakthrough in the adoption of quantum computing on a grand scale. By reworking the architecture of microprocessors we know, the scientists were able to create the first-ever design of a complete quantum computer chip that allows quantum calculations to be performed using a silicon-based material.

Known as complementary metal-oxide-semiconductors (CMOS), these standard industry components are a crucial part in the design of all modern-day electronic devices. Dr Andrew Dzurak, who led the UNSW research team, said:

“We often think of landing on the moon as humanity’s greatest technological marvel. But creating a microprocessor chip with a billion operating devices integrated together to work like a symphony – that you can carry in your pocket – is an astounding technical achievement, and one that’s revolutionised modern life.”

“With quantum computing, we are on the verge of another technological leap that could be as deep and transformative. But a complete engineering design to realize this on a single chip has been elusive. I think what we have developed at UNSW now makes that possible. And most importantly, it can be made in a modern semiconductor manufacturing plant,” he added.

The new quantum computer chip design, which could pave the way towards handling millions of ‘qubits’, short for quantum bits, uses on and off operations that are similar to those used to select bits in standard microprocessors. In simpler terms, the chip’s design basically charts the same engineering pathway used in today’s desktops, laptop PCs or open smartphone platforms such as the iPhone to perform quantum operations.

The difference however, when it comes to the quantum operating part of the equation are qubits. Unlike a standard ‘bit’ in a traditional computer, qubits, as super versions of bits, offer exponentially more processing power. This is based on the fact that these units of quantum information can be in two states or spin in two directions simultaneously, 0 and 1, at any given time. A standard computer bit on the other hand, can be in one and only one of these states.

While the two-state property – also known in quantum mechanics as ‘superposition’ – enables quantum computers to be exponentially faster than traditional computers, the drawback is that it’s extremely difficult to achieve and sustain a qubit in a superposition state which typically lasts a tiny fraction of a second. In fact, physicists are currently able to pack less than 50 stable qubits onto a chip. While that’s a significant achievement in the filed of quantum computing, the reality is that hundreds of thousands, if not millions of qubits are needed to achieve a practical, large-scale quantum technology. The reason for our current limited qubit-packing chip capability consists in the fact that qubits exist in a delicate, zen-like state of superposition which makes them extremely fragile, unstable and prone to error. Any tiny nudge from a jiggly atom next door can knock them off balance. Unless, qubits are connected to a system that defines their properties, even the slightest environmental interference can be amplified to wrong answers.

To overcome this and make qubits more robust, Dzurak came up with new error-correcting codes that allow multiple quntum bits to store a single piece of data.

“Our chip blueprint incorporates a new type of error-correcting code designed specifically for spin qubits, and involves a sophisticated protocol of operations across the millions of qubits,” he said.

“It’s the first attempt to integrate into a single chip all of the conventional silicon circuitry needed to control and read the millions of qubits needed for quantum computing.”

Dzurak also said that as they move towards the chip’s initial manufacturing process, further design modifications are to be expected.

“All of the key components that are needed for quantum computing are here in one chip,” he added.

While we haven’t by any measure officially achieved quantum computing, UNSW’s design is a massive technological leap in the journey towards creating large-scale quantum computers. When quantum computing will reach practical levels on a scale of what we see today with smartphones, the world-changing technology will not only complete tasks in minutes what current computers take thousands of years, but it will also lead humanity to the discovery and design of new life-saving drug-based treatments, help solve the most intractable scientific problems with incredible precision, create unhackable, superpowerful PCs and probe the mysteries of the universe. The sky will be the limit.

UNSW findings were published in the journal Nature Communications.

Amazon Throws Its Hat Into the Quantum Computing Ring (AMZN) 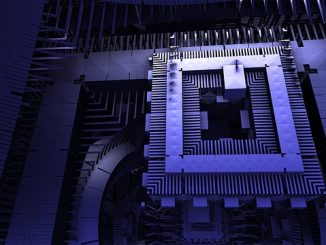 Google Marks the Beginning of a New Quantum Era