With the current technologies we have, a trip to Mars will typically take about 150 – 300 days or around 4 – 10 months. That’s obviously quite a long time, which is why scientists have been clamoring to figure out how to shorten the travel period. And they all agree that the way to achieve that is through a powerful propulsion system.

There are many ongoing experimental propulsion methods, some of which include using antimatter, nuclear fission or fusion, ions, plasma, solar sails, the propellant-less Em drive, and last but not least — photons.

Photonic propulsion uses photons (visible light particles or electromagnetic radiation in the form of light) to propel a spacecraft.

In a paper that came out through the journal “Acta Astronautica“, Espen Gaarder Haug — a professor of quantitative finance at the Norwegian University of Life Sciences — claims that based on theories of theoretical physicist Max Planck and his work on the nature of fundamental mass, length and time intervals, a ‘Planck photon rocket drive’ can hit a maximum velocity that’s as close as possible to the speed of light.

In a vacuum, the speed of light is 186,282 miles per second. At 99.999% of this speed (which is what can hypothetically be expected from a Planck photon rocket drive), a trip to Mars will only take 184 seconds. That’s just a little over 3 minutes!

Haug says he combined math and Max Planck’s theory about mass to come up with his conclusion — that each fundamental particle in a rocket’s payload would require 2 Planck masses of fuel to obtain the maximum achievable velocity. “The fuel is converted into light which leads to radiation pressure that drives the rocket forward,” he says.

According to Haug, however, the moment two photons collide, Planck mass particles will be generated, but they will disappear quickly upon being turned into energy. He also says that the fuel for a photon rocket can take on any form. What’s important is that it will allow for 100% conversion into light energy so the entire fuel mass can be converted into thrust that will drive the rocket forward.

While lab experiments have already shown that it is possible to use photons to drive an object forward, Haug recognizes that there’s still a long way to go before large photon rockets that can carry people or transport objects to space can be built. 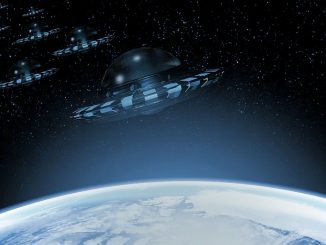 Pentagon Video Suggests We May Not Be Alone In The Universe

1 Comment on Only 3 Minutes To Get To Mars? That’s What A Photon Rocket Can Do!