University of Oxford biomedical researchers Pierre-Alexis Mouthuy and Andrew Carr have made a proposal that sounds sensible but also kind of scary at the same time. They want to use human tissue on robots. Just ponder on that for a while. It’s hard not to imagine sci-fi movie plots where you have no idea if you’re interacting with an actual human or just a robot that looks like a human, right?

In spite of how disturbing that thought may be, the rationale behind the proposal to delve into that scenario is quite reasonable, in fact. The objective is simply to create muscles and tendon grafts that work like the real thing. Further on, it can also pave the way for tissue transplants that do not even require human donors.

As it is, tissue engineering typically relies on bioreactors — machines that look like giant fish tanks — to grow and cultivate sheets of cells. While bioreactors are filled with chemicals and nutrients that cells need to grow, the limitation with such machines is that they cannot replicate the actual environment and conditions in which cells grow.

To clarify, cells in our muscles and tendons grow in a dynamic environment, so to speak, because we are constantly moving. And it is this constant movement that makes our muscles grow and become stronger. In contrast, engineered cells grow in a static environment where they do not experience natural multidirectional movement. The resulting tissue grafts are therefore not as robust and structurally stable.

This is the issue that robots are supposed to help with. What the researchers are proposing is a “humanoid-bioreactor system” that has “structures, dimensions, and mechanics similar to those of the human body.” In other words, the tissues would be placed on a robot’s body so that as the tissues grow, they would experience the same kind of strains and movements as if they were growing on a real human (because the robot is also moving like a human does… think Kenshiro robot of the University of Tokyo).

In theory, being grown in such environment will result in healthy tissues that are more human-like in terms of texture, shape, form and elasticity. Which means that when the tissues are finally transplanted, they will look and feel like real human flesh.

As described in the paper detailing the research: ‘By mimicking the human skeletal architecture and the body movements in different activities, they could help to overcome the limitations of current bioreactors.’

This kind of technique will be most beneficial for burn victims, as well as those who need transplants, especially the aging part of the population who are prone to injuries and musculoskeletal tissue disorders.

The research has been published in Science Robotics. 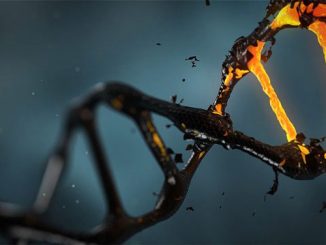