I don’t know who first declared “cash is king,” but it was Ralph Waldo Emerson who is said to have counseled, “When you strike at a king, you must kill him.”

Political leaders in India and Venezuela are doing their best to follow Emerson’s advice.

In early November, Indian Prime Minister Narendra Modi unexpectedly announced that nearly 90 percent of the paper money in circulation would soon become unusable. Circulating 500- and 1,000-rupee notes were instantly voided, and Indians had 50 days to deposit their cash into bank accounts or redeem their now-useless bills for redesigned notes. Or at least, that was the theory; exchanging old bills for new ones proved such an unwieldy process that the government told banks to stop making such exchanges, The Wall Street Journal reported.

The surprise was strategic. One of the major goals of India’s demonetization is to crack down on black market activity, and the government did not want bad actors to unload their illicit cash ahead of rumors it might soon become worthless. Other aims include improved tax compliance and more accurate monitoring of commercial activity in a country where even large transactions are routinely conducted with cash.

Of course, the disruption has been huge, especially since many Indians do not have bank accounts and the redesigned bills required engineers to retrofit existing ATMs to dispense them. But Indians should take at least small comfort in the fact that things could be worse.

They could, for instance, live in Venezuela. President Nicolas Maduro announced on Dec. 11 that the country’s 100-bolivar note would be invalid within 72 hours. This represents about 48 percent of the country’s cash – less than India’s demonetization, yes, but in an economy that was already in shambles. And, in a move that made India’s 50-day window look generous by comparison, Venezuela’s government decreed that anyone who had not deposited their bills by the time they became invalid would only have 10 days to submit them at the country’s central bank, where the currency-holder could also expect questioning from the secret police.

Maduro blamed the “mafia” operating on the country’s border with Colombia for damaging Venezuela’s economy. He claimed that invalidating the 100-bolivar note would mainly hurt criminals, and he closed the Colombian border until the end of the 72-hour transition period in order to prevent the supposed Colombian criminals from getting their stacks of Venezuelan cash back into the country.

India’s stated reasons for the dramatic strike against paper rupees are probably fairly close to the truth. Venezuela’s, on the other hand, are almost certainly not. In that desperately unfortunate nation, there is barely anything left to buy with cash anyway – so taking a large portion of it out of circulation helps keep crowds from gathering at stores whose shelves are empty. It also reinforces the power of an authoritarian government that can dole out limited supplies of the remaining cash to its most loyal and most necessary supporters, including the military and the police.

Governments around the world consider anonymous money movements a big problem, but it’s a problem that has distinct first- and third-world versions. In poorer, less-developed countries like India and Venezuela, large segments of the population conduct virtually all their business in cash. This provides cover for crime, smuggling and government corruption, while also undermining already abysmal compliance with tax laws among the broader population.

In the developed world, a much larger share of business transactions are far too large to be conducted in cash, and a much greater percentage of the population already handles payments via debit and credit cards, old-fashioned checks and newer vehicles such as mobile payment services. Financial institutions follow strict anti-money-laundering and know-your-customer rules (on pain of exorbitant fines), and are required to report significant cash deposits and withdrawals. It is even a crime in some places, including the United States, to break up your cash deposits simply to avoid crossing the $10,000 threshold that triggers reporting.

These mechanisms relieve the pressure to restrict the use of cash – but they don’t eliminate it. Tax cheating is rampant, and corruption is even more widespread, in some European Union countries, mainly in the continent’s southern tier. So it will not be a surprise if regulators there, too, eventually move against cash. Right now, however, they have more urgent issues to address, so restricting cash transactions is on the back burner.

Here in the States, we are in the odd position of providing the de facto currency for large parts of the world. Discussion of restricting the supply of our $100 bills and larger banknotes has historically been short-lived because of the troubles it would cause in countries, from the Andes to the Urals, where genuine greenbacks are prized. True, it is not our responsibility to serve as the world’s central banker, but Americans (especially those who travel) benefit from the widespread acceptance of our money, and that state of affairs is not something to lightly toss aside.

But fiscal authorities in the developed world cite many of the same complaints about anonymous money that Indian and Venezuelan authorities are claiming as justifications for their actions. Here, the complaints are not so much about the money movements themselves, which are generally easy to spot, but about the vehicles through which they are moved – often trusts and limited liability companies whose true beneficial owners are not easy to identify. Tunnel-visioned bureaucrats and lazy, narrow-minded journalists see only nefarious motives for such anonymity.

The trade-off for fighting anonymous money is, of course, loss of privacy. Take away cash and it becomes harder to make quiet child support payments that address a long-ended relationship. Take away LLCs, and it becomes harder to protect the identity of celebrities who want to keep stalkers away from their homes or wealthy foreigners who may be targets for kidnapping and extortion back home. Penalize banks outrageously for accepting deposits from a handful of customers whose sources of funds are not crystal-clear and above reproach, and it becomes absurdly difficult to establish accounts or move funds across borders.

Governments today claim a monopoly on the power to create money. (This monopoly is potentially challenged by bitcoin and similar mechanisms, which is why I expect that eventually those mechanisms will be all but criminalized.) Now governments are extending that monopoly power to claim the right to track all sources and uses of the money they create. We will gain something in tax and other legal compliance, but we will pay for it in a loss of privacy and efficiency.

In the end I doubt India and Venezuela will accomplish much by invalidating large swaths of their currencies. Their problems run much deeper. So my guess is that, until those underlying problems are fixed, new currency will just end up taking the place of the old. Those governments may have struck king cash, but they haven’t killed it. The more effective blows are being landed right here in the West. 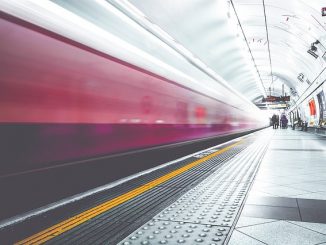 The Concorde of Trains Could be Heading to India