SOLAR CHINA: As one of the nation’s largest solar contractors and recipient of nearly $1 billion in tax subsidies and grants, SolarCity (SCTY) has imported millions of panels from Chinese companies during the past eight years in its quest for market dominance.

Months before the U.S. government slapped Chinese manufacturers with hefty tariffs on solar panels that were flooding the American market, at least one American stood – or rather sat – with the Chinese.

John Stanton, vice president of policy and markets with California-based SolarCity, defended Chinese manufacturers at a Jan. 22 U.S. International Trade Commission hearing to determine how the feds would respond to allegations that the Chinese government-backed companies had destroyed more than 2,000 U.S. jobs.

As one of the nation’s largest solar contractors and recipient of nearly $1 billion in tax subsidies and grants, SolarCity has imported millions of panels from Chinese companies during the past eight years in its quest for market dominance. The company’s unique leasing program leaves SolarCity as the owners of its customers’ rooftop systems, and that means SolarCity reaps the tax incentives.

Many American companies haven’t been able to compete with counterparts that are underwritten and, in some cases, owned by the Chinese government.

One recent victim, Sharp Corp. in Memphis, laid off 311 workers in March and ceased making solar panels altogether, according to media reports and Timothy Brightbill, SolarWorld’s attorney arguing the case. At least 28 companies have folded, according to the Coalition for American Solar Manufacturing.

“The Chinese government subsidizes the land, water, supply chain and even has state-owned companies,” Santarris said.

The result is an overabundance of panels, which China has been selling at a loss.

“The Chinese have the long view, and if they have to sell at a loss — which they can because they are backed up by their government — they will do so until they are the last man standing,” said Solar Biz Inc., a New Mexico company with nine employees. “Without competition, we will have to pay whatever they say.”

“I just wanted to make the point that SolarCity is a large purchaser of BenQ modules for use on U.S. military property,” Stanton said. “And we do that because of quality and their willingness to use the Zep mounting frame.”

The Zep frame is manufactured by SolarCity.

Stanton did not say which military bases received the BenQ panels. SolarCity has received $11 million in tax dollars through the stimulus fund to install panels on three bases in California: China Lake, Camp Pendleton and Lemoore. If foreign panels were used on those sites, their use would violate the American Recovery and Reinvestment Act (ARRA), which requires use of American-made products.

SolarCity spokesman Jonathan Bass had no comment on this article and refused to divulge the brand names of the panels or say on the record where they were manufactured.

Sen. Jeff Sessions, R-Alabama, suspects that Chinese panels have been used in stimulus projects. In an April 29 letter, Sessions, the ranking Senate Budget Committee member, reminded Treasury Secretary Jacob Lew of the ARRA’s buy-America provision and asked how compliance can be guaranteed.

That letter followed Sessions’ November inquiry, when the senator cited a Barron’s investigation alleging that SolarCity was inflating the cost of its installations resulting in increased tax benefits. This prompted an investigation by the Treasury Inspector General for Tax Administration, which is ongoing.

SolarCity and its Asian partners lost a preliminary decision in the trade case on June 3, when Commerce officials closed a loophole that previously allowed Chinese products to escape a tariff if only a portion was produced in another country. So now, companies sourcing from China will be forced to pay between 19 percent and 35 percent tariffs depending upon the level of involvement by the Chinese government, Brightbill said. Additional tariffs to offset Chinese dumping will be announced by the Commerce Department in July.

SolarCity, whose CEO and largest shareholder is billionaire Elon Musk, says buy-American provisions like those embedded in federal procurement contracts would mean, Stanton said, that “key markets for solar panels will disappear, putting at risk the 110,000 jobs in the U.S. solar installation industry.” 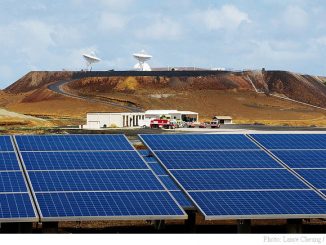