The recent pick up in Bitcoin’s (CRYPTO:BTC) bullish sentiment, a sentiment prompting the crypto’s price to move to a six week high and toward the $40K range, seems to have resulted in increased activity on Ethereum’s (CRYPTO:ETH) network.

According to data provided by crypto analytics firm Santiment, Ethereum whales, or addresses holding between 10K and 1 million Ether in their respective digital wallets, have embarked on an accumulation spree.

“Ethereum whales…now own a cumulative total of 60.52m coins”, Santiment said, noting that this is “the highest amount held by this tier since 5 weeks”, representing “a 1.65m ETH accumulation in the past 6 days.”

Another recent notable activity in ETH wallets was reported by crypto tracking firm Whale Alert. The activity, recorded on July 12, 2021, indicates a wallet transferring 40,000 coins from the Gemini crypto exchange to a digital wallet. The total value of the transfer stands at around $86 million. The transfer came nearly 2 weeks after a top Ether wallet moved 81,760 ETH from a digital wallet to crypto exchange Binance.

Whale Alert also featured another interesting activity, that of the transfer of 145,363 Ether coins to an unknown digital wallet, with the total value of the referenced exchange printing around $292 million.

The activity on the network has also extended to the Ethereum investment products. As CoinShares reports, Ethereum-related venture items pulled in $11.7 million worth of inflows last week, contrasting with Bitcoin’s outflows of $10.4 million in the week ended July 16, and nearly $7 million the previous week.

Earlier this month, Ethereum saw another positive development, that of surpassing for the first time Bitcoin in the number of daily active addresses. In a note to investors, Goldman Sachs (NYSE:GS) featured Ethereum’s “smart contract” decentralized manner and its utility in being the platform of choice for the majority of De-Fi (decentralized finance) protocols. The Wall Street banking giant referenced that ETH could overtake Bitcoin in the crypto sphere.

In the last week, the value of the Ether has increased by 28% to $2,332. It should be noted that one of the major reasons behind ETH’s recent price jump is Ethereum’s upcoming network upgrade. Eth2 is expected to make the platform more scalable, more secure, and more sustainable. 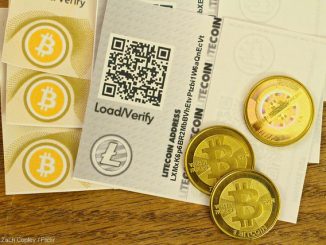 Ripple CEO: ‘Dozens’ of Banks Expected to Use XRP in 2019