USA-Today and the cited Center for American Progress is not being serious in its latest analysis about taxes. They are claiming that taxes are only 9.2% of income, and that this is some sort of historical low.

“Federal, state and local taxes — including income, property, sales and other taxes — consumed 9.2% of all personal income in 2009, the lowest rate since 1950”

According to the Bureau of Economic Analysis total government revenue in last quarter of 2009 was 30.2% of National Income, hardly 9.2%. In the first quarter of 1950 revenue was 23.8% of national income, less than they are now.

How do they cheat the figure down to 9.2%? By excluding most taxes from government revenue. For example, the payroll tax is not defined as a tax, even tough for most individuals it is a bigger burden than the federal income tax. This is not serious analysis. Over time, more of government revenue is coming from indirect taxation. Should this be combined with accounting tricks to give the false impression to the voters that taxes are going down?

Trained journalists and economists should work to inform the public, not use their superior knowledge to obfuscate. For example, the BEA defines the trillion dollars in revenue from payroll taxes as “Contributions for government social insurance”. Fine. For all intents and purposes, this is a tax, and anyone who knowingly removes it from taxes without explaining it and tells the public they are paying little in taxes is a simply dishonest.

It becomes extra disgusting when these tricks are used to portray their political enemies as stupid and uninformed. For example, USA-Today portrays Tea Party follower as ignorant, because they are protesting taxes which are only 9.2%, the lowest in 60 years, and declining. The only problem with the story is that taxes are not only 9.2% on average, they are not the lowest in 60 years, and tax rates are not going to decline.

Remember also that during a recession tax revenue goes down even while tax rates stay the same, simply because firms and people are poorer. According to economic theory burden of taxation for society depends on the effective tax rates, not the tax revenue.

Lastly, the burden of government includes deficits, which are only delayed taxes (with interest). Are the Tea Partiers supposed to be mucked because they are prudent and take the future into account?

Within the discipline of economics, introducing forward looking individuals into public finance was considered an improvement. It seems however that the modern left bizarrely enough is accusing you of being cray if you think ahead a couple of years. According to the left smart citizens are supposed to simply ignore the impacts of President Obama’s shortsighted and unsustainable policies on Americas future.

I have plotted the government as a share of national income from 1950 until today. First, the graph with revenue. As you can see there is a slow upward trend, combined with some cuts in the Bush years and a collapse of revenue after the crisis. Second, the graph with the total size of government. Leviathan is growing over time, with acceleration during the last year and a half. But why let our lying eyes deceive us when the mainstream media and leftist think thanks are assuring us that government is smaller than ever, and that taxes are not going up, despite Obama’s own proposals and despite massive deficits? 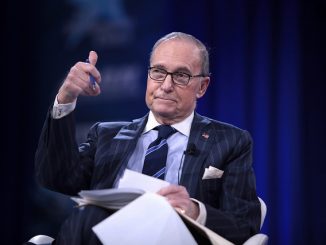