Last time, the dot-com boom was driven by a frenzy over gaining eyeballs. Valuations went through the roof well before revenues.

This time the hot companies are growing real revenues remarkably fast. The WSJ noted how much faster the leaders like Groupon and Zynga have raced towards $1B in revenues, much faster than in prior tech booms and perhaps the fastest in history:

Compare all of this with the software industry. [L]ess than one-third of the nation’s top software companies reached $50 million in annual sales in six years or less – and the fastest to $50 million, Novell, took three years. Microsoft crossed the $50 million barrier in eight years; Oracle, 10 years. 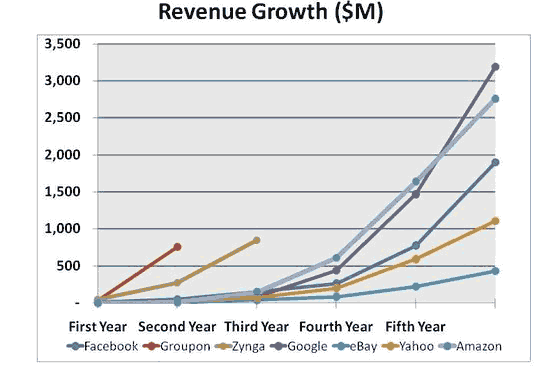 It should be no surprise, then, that Facebook has crept back to a $70B market cap in private trading, and JP Morgan (JPM) just raised a $1B fund to buy into the private market of shares for high-fliers, beginning with Twitter. Something big is brewing, and the smart money is leaping in.

The tech trade press is beginning to figure out that these valuations fit within normal metrics, assuming the incredible growth continues.

It is too facile to knee-jerk and call it a bubble when we have revenue growth of this magnitude by the leading social companies.

What Makes the U.S. Special

TR50: The 50 Most Innovative Companies