To compound Merkel’s obsequiousness to Putin, and her pushing Ukraine into his embrace, she broadly hinted that Ukraine should join Putin’s pet project, The Eurasian Union. Since Putin has made it clear that membership in the Eurasian Union and the Real EU are mutually exclusive, this is tantamount to turning Europe’s back on Ukraine and leaving it to Putin’s tender mercies.

Merkel’s remarks make it clear that her primary motive for abandoning Ukraine to Putin is to keep good relations with Russia, and to avoid riling Vlad:

“And if Ukraine says we are going to the Eurasian Union now, the European Union would never make a big conflict out of it, but would insist on a voluntary decision,” Merkel added.

Nauseating. Like my grandfather said about a hostess trying to hint to  a guest who had overstayed his welcome that he leave: “Here’s your hat, Bob. Why are you in such a hurry to leave?”

For his part, during the Eurasian Union summit in Minsk, Putin made it clear that Ukraine had to choose between one EU or the other, and if it chose wrong, Russia would punish it. This is the fate that Merkel is willing to consign Ukraine to, so that Siemens can continue to sell to Russia, and Adidas can provide all the track suits that the gopniks desire:

In his public comments, Mr. Putin highlighted the dangers he said Russia faces if Ukraine pursues closer ties to the West. Since the onset of the crisis, Mr. Putin has accused the West of meddling in Ukraine’s internal affairs and trying to spoil its relations with Moscow.

Mr. Putin said that a trade agreement between Kiev and Europe will flood the Ukrainian market with European goods, which may then find their way into Russia. “In this situation Russia cannot stand idle. And we will be prompted…to take retaliatory measures, to protect our market,” Mr. Putin said.

The interesting thing about this is just what it betrays about what Putin thinks about Russian competitiveness. Yes, Russia is so great. Russia is so strong. Russia is a beacon to the world. But it can’t produce things its own people and businesses want.

Note the phrase: “take retaliatory measures, to protect our market.” Remind me again: didn’t Russia join the WTO? Apparently Putin is unclear on the concept.

Further note whom Putin is protecting Russian markets against: Europe. Apparently Angela is unclear on some concepts too.

Putin and many (most?) other Russians inveigh about Russophobia. When he says things like that, it’s hard to think of a bigger Russophobe than Putin. He evidently does believe that Russians are inferior, and in need of protection. 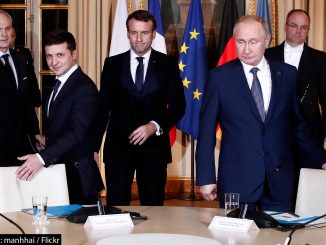 The Cards Are Stacked Against the Russian Investment Case